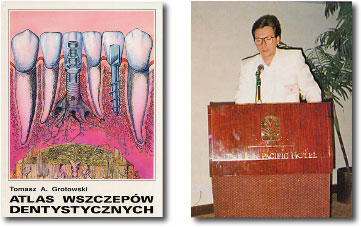 - Graduate (1981) and thereafter assistant lecturer at the Department of Prosthetics, Pomeranian Academy of Medicine in Szczecin, Poland.
- Degree in Spec. in Stomatology (1982).
- Since 1985 has lived in Italy; after notification of his Diploma in Dental Medicine (at University of Palermo, 1986) and registration in the Register of italian Physicians.
- member of many Italian and world organisations, such as:

- Author of numerous papers on dental prostheses and oral implantology.
- Participant and lecturer at many international symposia and congresses.

Studies on the implant and the first trials of its application were performed in 1970 by an Italian physician - Dr Dino Garbaccio, a creator and pioneer of BICORTICALISM, i.e. the idea of using the compact part of bone (i.e. cortical layer, Fig. 1) that is characterised by a different structure and mineralisation when compared with cancellous part, which immediately make it possible to make a prosthesis. This fact distinguishes the Garbaccio implant from all other implants found today (circa 2 thousand). The Garbaccio screw can be applied in all cases of dental defects found in a patient (Fig. 2 and 3), practically irrespective of age. In cases of single tooth loss, in particular in the anterior part of the maxilla or mandible, the application of the Garbaccio implant (especially in young people) is a simple expedient, which avoids the grinding of adjoining, frequently sound teeth with the aim of making a fixed denture (bridge). Implantology in this sense is a method that expands the range of prosthetic convalescence; the application of the Bicortical Screw prevents resorption, i.e. permanent atrophy of base foundation hard tissues (bone tissue), this fulfilling this way, apart from convalescence, also a prophylactic function.
In this specific case (i.e. single tooth loss), prosthetic abutment obtained by the Garbaccio Screw make it possible to make a single crown in about 30 minutes, not after 3 or 6 months as in the case in two-phase techniques.
The Bicortical Screw implant, due to its construction, conforms with its characteristics to an ideal implant, which can be presented as follows:

1. Biocompatability - i.e. it is made of fine titanium, which allows, due to its physical and chemical properties, integration with the bone tissue, in other words OSTEOINTEGRATION.
2. Minimal volumetric size - implant shaft diameter is only 2.2 mm.
3. Atraumatism - comparing this type of implant with other implants used today, the insertion of Bicortical Screw never requires opening of the mucoperiosteal flap and sewing of up a postoperative wound! This way the patient is not fated to pain or postoperative swelling after the procedure.
4. Immediate preparation of implantoprosthesis - supporting on cortical layers (aditus and antagonistic) gives prompt and dependable stabilisation of implant (Fig. 1), which makes it possible to load the implant with a fixed denture (crown, bridge) immediately after the procedure

5. Maximum adaptation in relation to different prosthetic solution used.
6. Absence of permanent damage to the bone tissue in case of failure (i.e. when implant removal is necessary) - minimal implant diameter of 2.2 mm (other implantological systems are 4 mm and more!) allows complete healing and possible second implantation procedure in the same place as early as 4-6 weeks later. Such management is not possible in other implantation systems!
7. The Garbaccio Screw can be applied very often as an immediate post-extraction implant.
8. This implant can be also applied in hybrid constructions, i.e. by including patient's own teeth in the implanotoprosthesis, even though they show first or second mobility.
9. Implant insertion requires use of relatively small amounts of topical anaesthesia.
Due to the very wide interest in Bicortical Screw, it has been patented in the following countries: